What if you already know your future… but not the path to take you there?

When Sarah Peterson accepts her Auntie Kay’s unexpected offer to take over her florist’s shop, she’s prepared for a change of job, home and lifestyle. What she isn’t prepared for is the discovery of a scarily accurate clairvoyant reading that’s been missing for twelve years. All her predictions have come true, except one: she’s about to meet the man of her dreams. Oh, and his name is Steven. Suddenly Stevens are everywhere. Could it be the window cleaner, the rep, the manager of the coffee shop, or any of the men she’s met online? On top of that, she finds herself quite attracted to a handsome web designer, but his name isn’t even Steven… During this unusual search, will Sarah find her destiny?

Sarah is living in London trapped in a dead end relationship with a firefighter named Jason, which should have ended a long time ago. Finally she gets the courage to end it but still worried she’ll end up dying alone like her Uncle Alan she flees back home to Whitsborough bay where her Auntie Kay offers her the opportunity of a lifetime, to take over her florist’s shop.

While packing she finds a tape from when she was eighteen, predicting what her life would be like for the next fifteen years. On it, it says she will meet a man named Steven and he’ll be the one. With that in mind she starts her hunt for Steven but her eye catches the handsome Nick but he’s not called Steven. Then her ex, the one who’d she’d always thought was the one comes back into her life suddenly, who should she pick or should she keep searching for Steven?

So this is the second story I’ve read by the lovely Jessica Redland, you can read my review of the first, Raving About Rhys (the prequel novella in the Whitsborough bay series), here.

I’m having real difficulty review into words because all I want to say is aww! (It gave me all the feels as the kids say) This book will make you laugh, cry and fall in love all within three hundred pages.

Not only does the writing flow well, making it fun and easy to read, the characters are fantastic too. I think we can all relate to Sarah in some way shape or form, from being trapped in a dead end relationship or that fear of dying alone or being a little socially awkward. Then we have the dishy Nick, who’s not just a pretty face but has burned in the past by love, who is absolutely adorable. Sarah’s two best friends add a little bit of conflict to the mix. Elise has been her best friend since primary school and married since she was young and then we have Clare who is the complete opposite, single and loving it and they both don’t get along! Also an honourable mention to Auntie Kay who gives Sarah her florists so she can live the dream turn her hobby into a job, I’m a little jealous to be honest, I’d love to do that myself!

I’ve seen a few reviews bemoaning that the storyline isn’t that original but seriously who doesn’t read a rom com and not wish for the main character to end up with the man of her dreams? As I said with her previous book, Jessica Redland takes a traditional romcom storyline and makes it her own, digging deeper and making her character really life like.

Even though this is set near to Christmas I’d say if you’re off on your holidays it’s a perfect read to take with you.

Jessica had never considered writing as a career until a former manager kept telling her that her business reports read more like stories and she should write a book. She loved writing but had 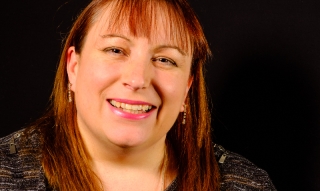 no plot ideas. Then something happened to her that prompted the premise for her debut novel, Searching for Steven. She put fingers to keyboard and soon realised she had a trilogy and a novella!

She lives on the stunning North Yorkshire Coast – the inspiration for the settings in her books – with her husband, daughter, cat, Sprocker Spaniel, and an ever-growing collection of collectible teddy bears. Although if the dog has her way, the collection will be reduced to a pile of stuffing and chewed limbs!

Jessica tries to balance her time – usually unsuccessfully – between being an HR tutor and writing.