Title: Shadows of the Woods by Duncan Thompson

Faceless shadows, a night that will never be the same, and a sinister force. If you go down to the woods tonight, you’re in for a sinister surprise.

When a stag party decides to camp in the woods, they soon discover that a malevolent force has them in their sights. As the unknown creeps ever closer, Joe and his friends must survive. To survive, Joe must learn to fight. If he fights, he could lose it all.

A rollercoaster ride of blood, sweat and tears, Shadows of the Woods will keep you hooked, all whilst throwing nostalgic homage to slashers of the late seventies and early eighties.

A Night Terror that you won’t be forgetting any time soon.

I want to thank Emma at Damppebbles blog tours for inviting me on this tour and Panther Publishing for providing me with a copy of the book in exchange for an honest review.

Joe and his friends decide to go camping for his stag do but instead of a nice lad’s night out, they find something sinister and end up fighting for their lives. Who will survive?

Shadows of The Woods is a short sharp shock filled book!

There was plenty of fast paced action, adventure and horrifying scenes for any horror fan to get their teeth into.

This very much a monster driven story and my goodness the monsters were a little terrifying! I don’t want to give away any spoilers but I’m very wary of shadows now.

The book did contain the old camping in the woods trope but I feel the author made it their own and took a fresh spin on it.

There was quite a large cast of characters and with this being a novella, I felt we didn’t get to know the characters quite as well as I’d liked.

Shadows of The Woods is at times a gruesome and adventure packed novel that I genuinely couldn’t predict when I was reading it.

Duncan has spent most of his life in a small market town in West Yorkshire — the same town in which most of his stories are set under the guise of Ravenfield. Duncan has been writing works of fiction since the age of seven. In those early days, his stories often involved himself and his friends being transported to fantasy worlds. However, as a teenager, Duncan fell in love with horror movies and his writing took a whole new direction.

Duncan still lives in West Yorkshire with his partner and their two young children. He also has slight obsession with Spider-Man and the actor Bruce Campbell, as well as having an addiction to vinyl records, coffee and Lego.

Title: The Demons Beneath (DI Graves #1) by WD Jackson-Smart

A detective new to London. A possible serial killer. And a demon?

When a bloody corpse is discovered in a North London park, Detective Inspector Daniel Graves is the man tasked with finding the killer. With no clues and no suspects it seems like a dead end. Then another body turns up and this time it looks like it could be his fault. Has his investigation caused the murderer to strike again? Is he dealing with a serial killer?

As the case gets ever more complicated, a report comes in of another suspicious death but this is nothing like any other Graves has dealt with. All involved are convinced that something supernatural is to blame. A demon. Daniel is no believer but could he be wrong?

With two cases on his shoulders and the truth behind each beyond his grasp, Graves must race against time before both killers, human or otherwise, strike again. 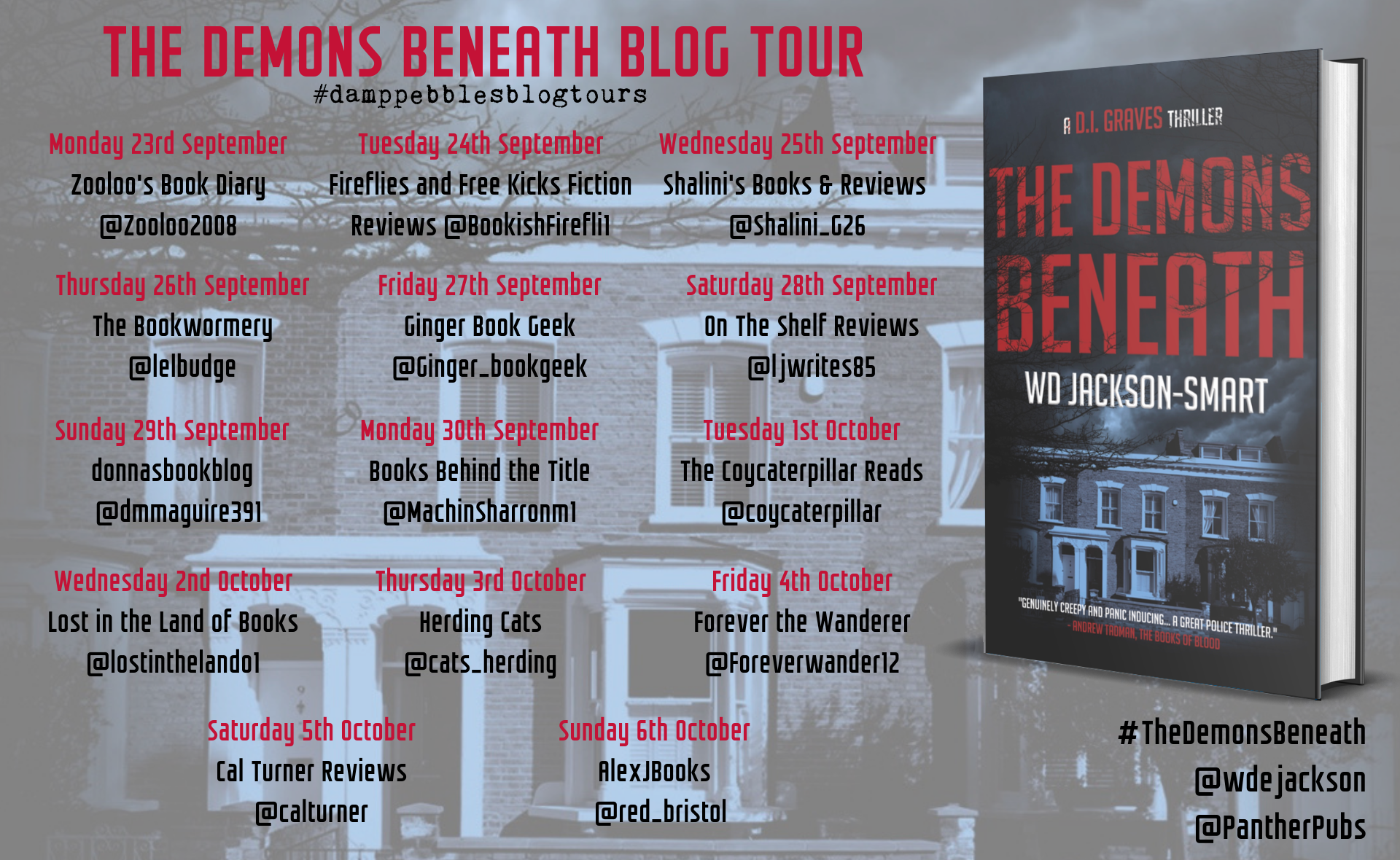 I want to thank Emma at Damppebbles blog tour for inviting me on this tour and providing me with a copy of the novel in exchange for an honest review.

DI Daniel Graves is not having a good time of it! First he’s assigned a baffling case of a tortured body found in a park, then he gets called to an address when the family think that a demon has killed someone. Will he be able to crack both cases?

The Demons Beneath is gripping and spooky police procedural that really shakes things up, blurring the lines between police procedural and horror. I love it when an author does this to create a really exciting and entertaining read.

DI Daniel Graves is an engaging character. He’s a solid hard working copper, who’s just transferred from the sleepy town of Buxton in Derbyshire to the mean streets of London. As the novel progress we get to learn a little more about his history and his insecurities, making him feel like a real fully rounded character. His partner Charlie was a bit of a mystery, good looking, funny but we don’t get to find out as much about him as Graves, which I hope to see as this series goes along.

I also thought it wasn’t too graphic, so if like me you enjoy something scary but without too much violence, I’d definitely recommend this book for you.

Now this is probably a minor thing to a lot of people but I really don’t like Americanisms in British set novels which unfortunately this novel had scattered throughout.

There is a little, I’m not going to say cliffhanger, more of an open ending, which has made me very excited for the next book.

The Demons Beneath is suspenseful and thrilling read that I just couldn’t get enough of!

WD Jackson-Smart, 35, is a London-based horror and crime fiction author who has been writing crime and horror fiction since 2011. His novel Red Light was self published on Amazon and

His horror short story, What’s Yours Is Mine, was shortlisted for the Horror For Good anthology.

His first crime thriller Slasher, about a serial killer targeting slasher movie actresses in Hollywood, is out now, and he has launched a brand new crime series set in London and starring D.I. Graves. The Demons Beneath is the first in the series, and the sequel From Inside The House was published on July 1st 2019.

As well as his passion for horror and crime thrillers in all forms, WD Jackson-Smart also loves art and design, having studied Fine Art and Art History in Leeds and Toronto and working as a graphic designer for the majority of his career.