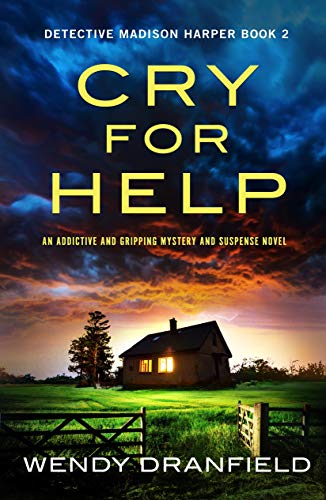 Shivering in the early morning chill, the caretaker flips the switch on the Ferris wheel and stumbles back in shock. The teenage girl’s body is slumped in a halo of pretty colored lights, long red hair spilling over her tear-stained cheeks, her eyes fixed forever on her dangling feet.

When teenager Nikki Jackson’s body is found at an amusement park, just hours after Fourth of July fireworks lit up the night sky, the Lost Creek police rule her death as suicide––a devastating final act from a girl who had lost all hope. But the absence of the knife used to make the wounds on her delicate wrists makes Detective Madison Harper think otherwise. And the partial fingerprint found on the girl’s face proves her right. Someone else was with Nikki in her final moments…

Back home in Colorado for the first time in seven years to investigate the murder of a woman with ties to the son she lost to the care system, the pressure is on for Madison to work both cases at once. Fearing the team has missed a vital clue, Madison searches the crime scene alone and finds the last thing she ever expected: a note proving the victims knew each other, and that the cases are linked. Is this a coincidence, proof a dangerous murderer is on the loose, or a trap set to lead Madison off the trail?

It’s only when Madison finally finds the knife used to harm Nikki, tucked in an almost impossible to find hiding place, that she knows she is closing in on a twisted killer. But the last person she expects to see dragged into the department in handcuffs is her own missing son…

An absolutely unputdownable crime thriller that will have you sleeping with the lights on. Addictive reading for anyone who loves Lisa Regan, Robert Dugoni and Melinda Leigh.

I enjoyed the first in this series earlier this year and as I know the third is coming out soon; I thought I’d better catch up with this one.

Madison is heading home to clear her name and find her son, but things get complicated when the body of a teenage girl is found. She and Nate can’t leave it unsolved, but the case quickly gets personal for Madison.

Cry For Help is one of those books that grabs you from the very beginning, getting more and more taut with tension building to a satisfying and action packed ending.

This book had so many little shocks and surprises along the way, which I didn’t see coming and absolutely loved!

I really enjoyed getting the full story of Madison’s arrest and more bits and pieces from her past, something I felt was missing from the first book. Of course that meant Nate sort of took a back seat for most of the book but I think it worked out well and I wonder what Wendy Dranfield will do next with these characters.

I absolutely flew through the first half of this book but for some reason I found the second half a little more slow going, maybe it’s just I didn’t want it to end!

Cry For Help is a fast-paced and addictive read and I can’t wait to read more from this series!

Wendy is a former coroner’s assistant turned crime writer who lives in the UK with her husband and 3 cats.

Her first novel (The Girl Who Died) was longlisted for the Mslexia Novel Competition. Since then she has written two crime series – one follows Officer Dean Matheson on his quest to make detective, and the other is her current series which follows Detective Madison Harper as she tries to reclaim her life after spending six years in prison for a murder she didn’t commit.

As well as crime novels Wendy also has short stories published in various anthologies in the UK and the US, and she has been shortlisted and longlisted for various writing competitions.