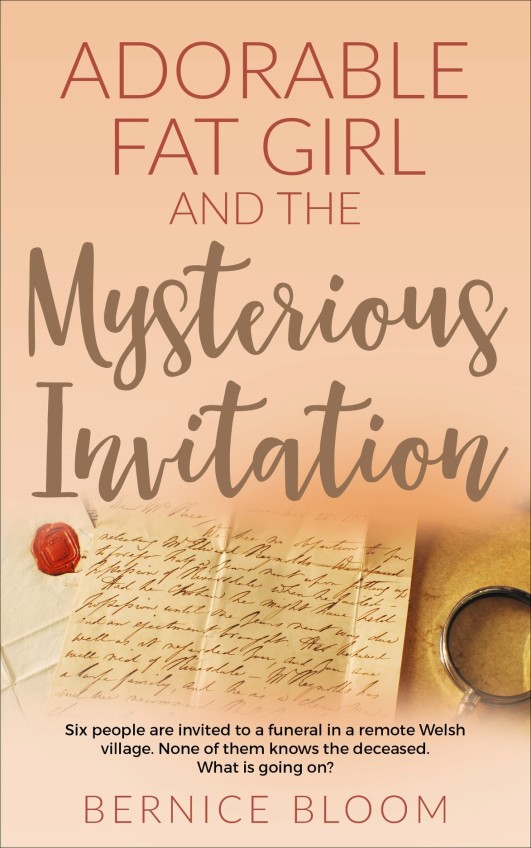 Title: The Adorable Fat Girl and The Mysterious Invitation by Bernice Bloom.

Mary Brown receives an invitation to a funeral. But she has absolutely no idea who the deceased is. She’s told that he invited her on his deathbed, and he’s very keen for her to attend, so she heads off to a dilapidated old farm house in a remote part of Wales. When she gets there she discovers that only five other people have been invited to the funeral. None of them knows who he is either.

NO ONE GOING TO THIS FUNERAL HAS EVER HEARD OF THE DECEASED. WHAT IS GOING ON??

Then they are told that they have 20 hours to work out why they have been invited in order to inherit a million pounds.

Who is this guy and why are they there? And what of the ghostly goings on in the ancient old building?

Featuring Mary Brown, star of the Adorable Fat Girl series of books, in her greatest adventure yet.

This is BOOK NINE in the series, but can be enjoyed as a stand-alone book or as part of the series.

So this is actually the ninth in the series which frankly I had no idea when I was reading it! I can say hand on my heart it works really well as a standalone.

Mary Brown is sent an invitation to a funeral for Reginald Charters, only problem, she has no idea who the man is!

Unable to pass up an adventure, she sets out to Wales and meets six other people who also have no clue why they’ve been invited either. They are each given clues as to why they’re there, but how do the events from the past have anything to do with them?

I absolutely devoured this novel!

This was a humorous and entertaining read and really not what I was expecting, in a good way! I kind of didn’t read the blurb properly and I was expecting a cosy mystery, which don’t get me wrong, there is an element of mystery but it’s more focussed on the unconventional cast of characters. It also has dual timelines, one going all the way back to 1943, the other now which is a difficult thing to pull off but this book certainly does!

I love a book that teaches me something! The historical aspect of the story is really strong and I did not know that during the war Italian prisoners of war were sent to Wales to help the farmers.

I liked the theme running through the book of be kind to strangers because you never know what might happen, I think it’s something we forget sometimes in this day and age.

Mary is such a fun and feisty character that I really warmed to. She’s surrounded by a real mix of characters too which she plays off nicely.

My only issue was the fact it was a little short!

The Adorable Fat Girl and The Mysterious Invitation is fun and entertaining that mixes a bit of mystery with historic events to make a really compelling read.

Also according to the little author’s note at the back of the book there’s going to be a follow up to this book, I can’t wait!

My name is Bernice Bloom and I write funny novels about a crazy lady called Mary Brown in my ‘Adorable Fat Girl’ series.

Mary is funny, gorgeous and bonkers. She’s also about six stone overweight. When she realises she can’t cross her legs and has trouble bending over to tie her shoelaces without wheezing like an elderly chain-smoker it’s time to take action. But what action? She’s tried every diet under the sun.

This series is the hysterical story of what happens when Mary joins ‘Fat Club’ where she meets a cast of funny characters and one particular man who catches her eye.
The series follows Mary as she goes on safari, on a cruise, to a weekend yoga retreat and on an incredible adventure when she receives a mysterious invitation to a funeral.

The stories are laugh-out-loud funny and will resonate with anyone who has dieted, tried to keep up with any sort of exercise programme or spent 10 minutes in a changing room trying to extricate herself from a way too-small garment that she ambitiously tried on and is now completely stuck in. xx