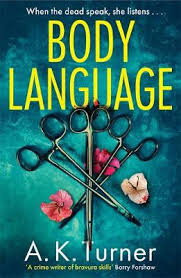 Camden mortuary assistant Cassie Raven has pretty much seen it all. But this is the first time she’s come face to face with someone she knows on the slab. Someone she cared about. Her friend and mentor, Mrs E.

Deeply intuitive and convinced that she can pick up the last thoughts of the dead, Cassie senses that there must be more to the ruling of an accidental death. Is her grief making her see things that aren’t there, or is her intuition right, and there’s something more sinister to her friend’s death than the ME thinks? Harbouring an innate distrust of the police, Cassie sets out to investigate and deliver justice to the woman who saved her life.

I saw so many fantastic reviews for this book at the end of last year when I saw it was on loan through my library app, (because you know I don’t have enough books to review), I thought I had to read that!

Body Language is an unusual crime thriller with a paranormal twist. First, we have our sleuth Cassie Raven, who’s a mortuary assistant rather than the usual either pathologist or police officer. Then the author added a bit of the supernatural, in the form of the dead speaking to Cassie, which made it a unique and memorable read.

Cassie and Flyte are fantastic characters who on the surface you think are very different. Cassie is a little Gothic with tattoos, piercings and a habit of talking to the dead bodies she looks after. She’s also a bit of a free spirit, not letting anyone or anything hold her down. Flyte on the other hand has just moved to London and is finding it a little hard to fit in. She is very uptight and a little OCD. The pair together was the perfect foil for each other, and I really warmed to both characters (although it took me a little longer to warm to Flyte!).

There was a lot going on in this book, as we have mysteries but these were also wrapped up alongside Cassie and Flyte’s day to day which got a bit much to keep straight in my head but didn’t spoil my enjoyment of the story overall.

I really hope this turns out to be a series and I look forward to reading more from these characters!

About The Author (taken from goodreads):

A K Turner likes to create memorable characters, throw them into unusual settings, and add a hefty dose of murder and a twisty-turny plot. Her latest book, Body Language, introduces a new kind of forensic heroine – a crime-solving Goth-girl mortuary technician who talks to the dead, a character first launched in two crime shorts aired on BBC Radio 4. A K’s previous series, written under the pen name Anya Lipska, starred a London-based Polish fixer who’s happy to crack heads to solve crimes – which saw her being selected for Val McDermid’s prestigious New Blood Panel at Harrogate Crime Festival in 2012.

A K (aka Ali) lives in East London where she is writing more mortuary-set mysteries. Her day job is producing TV documentaries on true crime and science topics. And just for light relief she is training to be a City of London guide…

Read more about A K’s books over at www.anyalipska.com where you can sign up to her newsletter for news and giveaways.