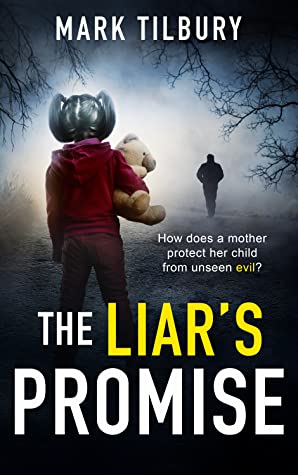 How does a mother protect her child from the unknown?

During a visit to a local theatre, four-year-old Chloe Hollis becomes hysterical. But her mother, Mel, doesn’t realise that this is just the beginning of the nightmare. In the coming weeks, Chloe talks of The Tall Man – Of death.

At her wits end, Mel confides in Charles Honeywell, the headmaster at the school where she works. But what Kim doesn’t know is that Charles is linked to what is happening to her daughter.

Will Mel learn the terrible truth? And can she overcome her own tragic past and save her daughter before it’s too late?

The Liar’s Promise is a story of past lives and future torment.

I was gifted a copy of The Liar’s Promise by the author in exchange for an honest review.

I’ve read and enjoyed a few of Mark Tilbury’s books now and with the author himself re-releasing a number of books it’s a great opportunity to catch up on a few I’ve missed. The Liar’s Promise appealed to me as I really enjoy books about past lives or have a supernatural element to them.

The Liar’s Promise is a dark and at times disturbing read that gets you into the mind of a devious killer.

The POV’s mostly alternated between the unscrupulous killer and mother on the edge Mel.  Mel was a bit of a tough character to like but due to her troubled past but when you find out the true extent of her trauma you can forgive her for being the way she is.

My favourite part of the book is Mark Tilbury’s writing style. It’s vivid, visceral, a little gruesome at times but that lends to the authenticity of the ruthless killer.

The book really started off strong, with a lot of ‘whys’ and ”what ifs’ but I did feel like I wanted a little more mystery, a little more suspense but of course that’s just my opinion.

The Liar’s Promise is an intense read that gives you a peek at the darker side of humanity.

Mark lives in a small village in the lovely county of Cumbria, although his books are set in Oxfordshire where he was born and raised.

After being widowed and raising his two daughters, Mark finally took the plunge and self-published two books on Amazon, The Revelation Room and The Eyes of the Accused.

He’s always had a keen interest in writing, and having had seven books published by an indie publisher, has decided to return to self publishing. After successfully publishing The Last One To See Her, A Prayer For The Broken is following in October 2020.

When he’s not writing, Mark can be found playing guitar, reading and walking.