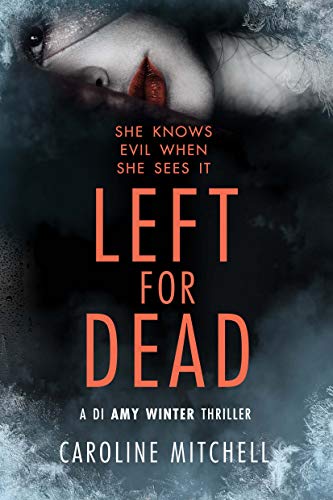 A victim on display. A detective on the rails.

Shopping with her sister, DI Amy Winter is admiring a Valentine’s Day window display of a perfect bride encrusted in diamonds and resplendent in lace—until she notices blood oozing from the mannequin’s mouth.

This is no stunt. A post-mortem reveals the victim was left to die on her macabre throne for all to see. When a second victim is found, it emerges that both women were ‘Sugar Babes’ arranging dates with older men online—and Amy finds herself hunting an accomplished psychopath.

As she tracks down the killer, Amy’s instincts go into overdrive when the charismatic head of the agency behind the display makes no attempt to hide his fascination with her serial-killer parents. What exactly does he want from Amy? With her own world in freefall as her biological mother, Lillian Grimes, appeals her conviction, Amy pushes the boundaries of police procedure when a third ‘Sugar Babe’ disappears…Is she as much at risk as the killer’s victims?

I want to thank Sarah Hardy for inviting me on this blog tour and Amazon publishing for providing me with a copy of this book in exchange for an honest review.

This is the third in the Amy Winter series but don’t worry if you haven’t read any of the previous novels  (you should because they’re fab) you can jump straight into this one without missing too much.

I’m always so excited when I see Caroline Mitchell has released a new Amy Winter book and I certainly wasn’t disappointed by this one!

A killer leaves their victim in a window display for everyone to see. If that’s not enough for Amy, she’s dealing with a new boss, a documentary film crew and the prospect of her mother Lilian Grimes (one of the beasts of Brentwood) may be getting out of jail.

Amy is on fine form in this book, bending the rules but never quite breaking them. There’s also a nice subplot about nature versus nurture. Does Amy have a darker side like her serial killer parents or is she more like her adoptive parents?

I’m usually not a fan of knowing who the killer is from the off but Left for dead still manages to get a few shocks in there to surprise me along the way.

Left for dead is a fast paced and utterly gripping serial killer thriller that has me eagerly awaiting the next book!

An international #1 and New York Times, USA Today and Washington Post bestselling author, Caroline originates from Ireland and now lives with her family on the coast of Essex. A former police detective, Caroline has worked in CID and specialised in roles dealing with vulnerable victims, high-risk victims of domestic abuse, and serious sexual offences. She now writes full time, with over a million books sold.

As well as her crime series, Caroline also writes stand-alone psychological thrillers. The most recent, Silent Victim reached the Amazon number 1 spot in the UK, US and Australia and won first place as best psychological thriller in the US Reader’s Favourite Awards. Her previous thriller, Witness, was shortlisted for the International Thriller Awards in New York. She has also been shortlisted for ‘Best Procedural’ in the Killer Nashville awards. Her crime thriller, Truth And Lies recently became a No.1 New York Times best seller and has been optioned for TV. Her works have been translated worldwide and her book, The Silent Twin, has been converted as an interactive app in the Chapters Interactive game.