After an unexpected death, three generations of women take over the family funeral-home and PI businesses in the first book of a brilliant, page-turning and darkly funny new series.

The Skelfs are a well-known Edinburgh family, proprietors of a long-established funeral-home business, and private investigators. When patriarch Jim dies, it ’s left to his wife Dorothy, daughter Jenny and granddaughter Hannah to take charge of both businesses, kicking off an unexpected series of events.

Dorothy discovers mysterious payments to another women, suggesting that Jim wasn’t the husband she thought he was.

Hannah’s best friend Mel has vanished from university, and the simple adultery case that Jenny takes on leads to something stranger and far darker than any of them could have imagined.

As the women struggle to come to terms with their grief, and the demands of the business threaten to overwhelm them, secrets from the past emerge, which change everything… It’s a compelling and tense thriller and a darkly funny, warm portrait of a family in turmoil. 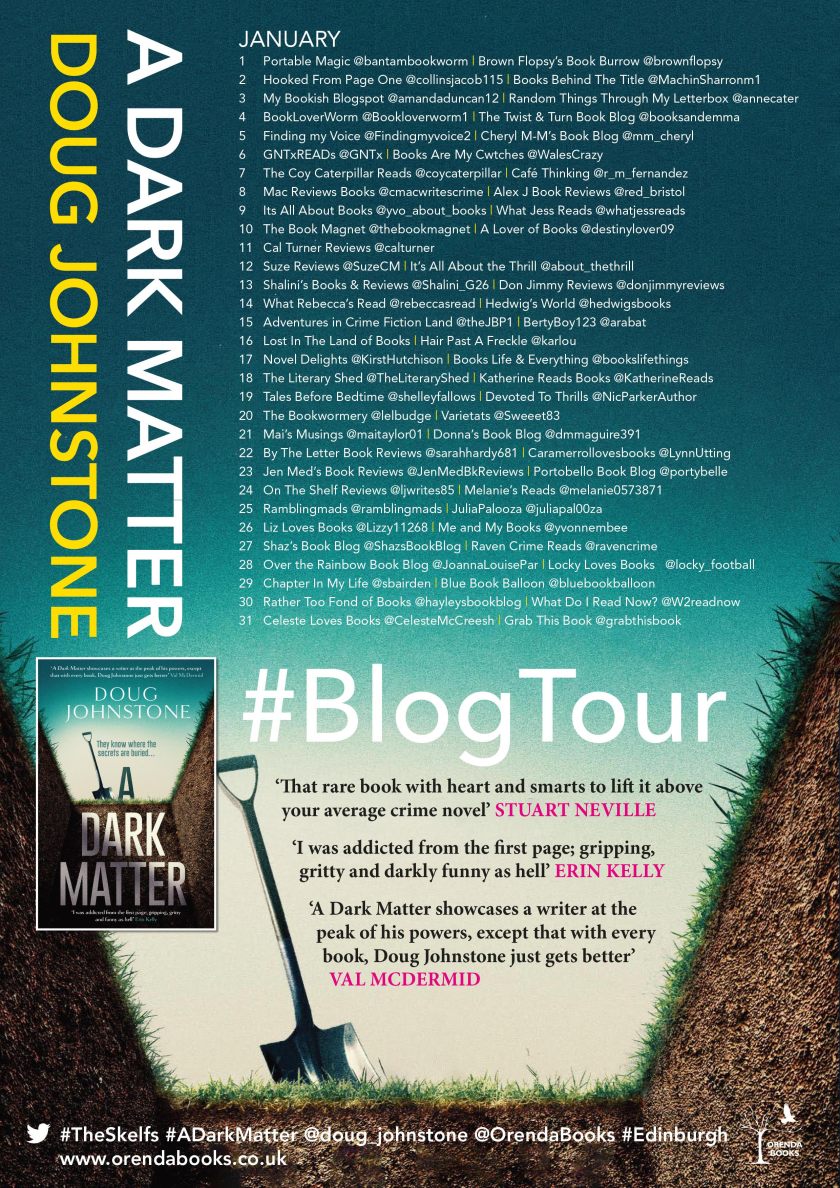 I want to thank Anne Cater for inviting me on this epic blog tour and Orenda books for providing me with a copy of this book in exchange for an honest review.

Wow, A Dark Matter was a complex, dark and utterly fantastic!

There is so much crammed into the just over three hundred pages of this novel, it’s difficult to know where to start, there’s just never a dull moment!

Here’s a sentence I never thought I’d write; funeral directing private investigators are what crime fiction has been missing. Genuinely I don’t think I’ve come across this concept before, especially as all the main characters are all women, and I’ve read a lot of crime fiction over the years.

There are several mysteries run side by side through the novel, each one of them intriguing in their own right. After her husband Jim’s death, Dorothy finds that he’s been sending money every month to a mystery woman. An elderly man thinks his carer is stealing from him so he wants cameras set up to spy on her. Jenny gets involved in an adultery case that seems to be more complicated than she first thought. Jenny’s roommate Mel goes missing but it doesn’t get taken seriously by the police so she decides to investigate herself.

The family dynamic really makes a dark matter. We follow three generations of the Skelf family, seventy year old Dorothy, forty five year old Jenny and Hannah who is in her twenties. Each one of these characters, at times are not all that likeable but they felt really and flawed.

A Dark Matter is an original, dark and gripping read, I can’t wait to see if there’s a second book.

Doug Johnstone is the author of ten novels, most recently Breakers (2018),

which has been shortlisted for the McIlvanney Prize for Scottish Crime Novel of the Year. Several of his books have been bestsellers and award winners, and his work has been praised by the likes of Val McDermid, Irvine Welsh and Ian Rankin.

He’s taught creative writing and been writer in residence at various institutions – including a funeral home – and has been an arts journalist for twenty years.

Doug is a songwriter and musician with five albums and three EPs released, and he plays drums for the Fun Lovin’ Crime Writers, a band of crime writers. He’s also player manager of the Scotland Writers Football Club.

He lives in Edinburgh.