Hello lovelies! Today I have a fabulous Q&A with author Tony Salter, plus a giveaway to win a copy of Sixty Minutes (see bottom of the post) but first a little about the book: 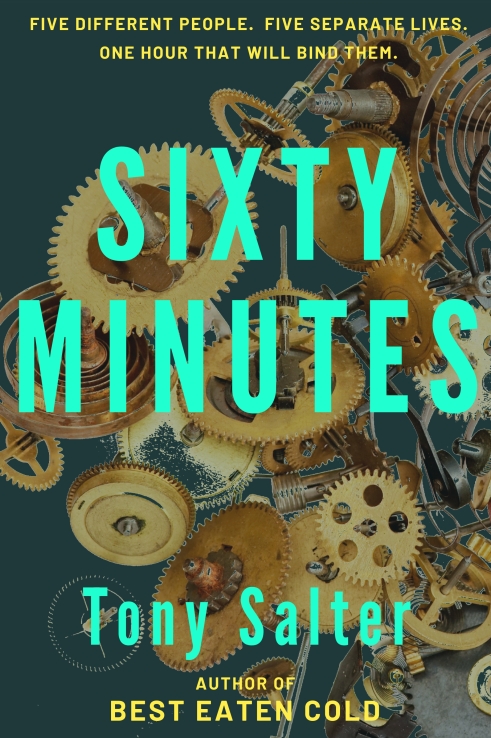 Five different people. Five separate lives. Sixty minutes to bind them for ever.

Hassan, Jim, Shuna, Dan and Nadia come from very different worlds. If life were straightforward, their paths would never cross. But our lives are rarely that simple and, as the clock ticks away the minutes of a single hour on a July morning, fate draws all five together in a headlong rush towards disaster.

Tony Salter’s latest novel leaves us guessing right up to the last page.

Can you tell me a little bit about your book?

Sixty Minutes is my fourth novel and is somewhat different from my others although it is still very much a thriller. Without giving too much away, I am quite limited, but the novel explores the actions of five very-different characters over a one-hour period. The reasons for each character to be present  (and any connections between them) appear as the story progresses.

We learn to know and understand all of the characters, although they are not all totally likeable. We see different sides to them, some of which are hopefully unexpected.

The core plot which drives the tension over the sixty minute period is reasonably obvious early on, but the way it plays out remains uncertain until the end. I wasn’t sure how it would finish myself until I reached the final chapters.

It is not trying to be a deep philosophical book, but it does touch onto some some sensitive themes and will hopefully make readers think a little once they’ve finished.

Where did the inspiration for your book come from?

I imagined the final scene (I can’t remember exactly why) and wrote it as a short story. I then realised that there was much too much room for cliché and stereotype in the short story format and decided to try to address the issues in detail and head on. I am aware that I am setting myself up for accusations of cultural appropriation, but don’t believe it is right to restrict an author’s imagination in that way. I don’t mind if a reader feels my characters aren’t real or even if they think the plot is dull and boring (actually I do mind – a lot), but do believe that an author should have the right to create characters who have very different backgrounds and experiences to the author’s own.

If you could describe your book in one sentence what would it be?

A tight tense literary thriller which will keep you gripped until the final page.

What is a typical writing day like for you?

I would normally write at a standing desk for four to five hours after breakfast. I set myself a target of 1500 words, but am happy to stop at 1200 or so, if I’m not feeling focused or if I have  other plans. I might sometimes do an hour or two in the afternoon but not as a rule. I do my basic research and check emails as I go. (thereby breaking the author’s golden rule of not being connected to the internet while writing)

If you could recommend just one book to read what would it be and why?

Who are your favourite authors?

Is writing your only job? If not, what is your other job?

I consider writing to be my full-time job now, but am also Chairman of a travel technology company which gives me the luxury of being able to write when I want to.

Tell me something interesting about yourself (that’s not in your author bio!)

When I was almost eighteen, I hitched down to the South of France from the UK with a friend. We slept on the beach in Cassis and woke up to find that everything we had  was gone. Passports, money, clothes – the lot. It made for an interesting holiday!

I am working on a new thriller which features one of the characters from Sixty Minutes, Nadia. This will be released in 2020

I am also working in the background on a historical  novel based on my grandmother’s diary which describes her journey from Brighton to Harbin in Manchuria in 1915 (via Newcastle, Norway Sweden, Petrograd and the Transsiberian Express). The book will also cover the six years she spent in Harbin, where she married my grandfather and gave birth to (and lost) her first son. This will probably take a couple of years to complete. 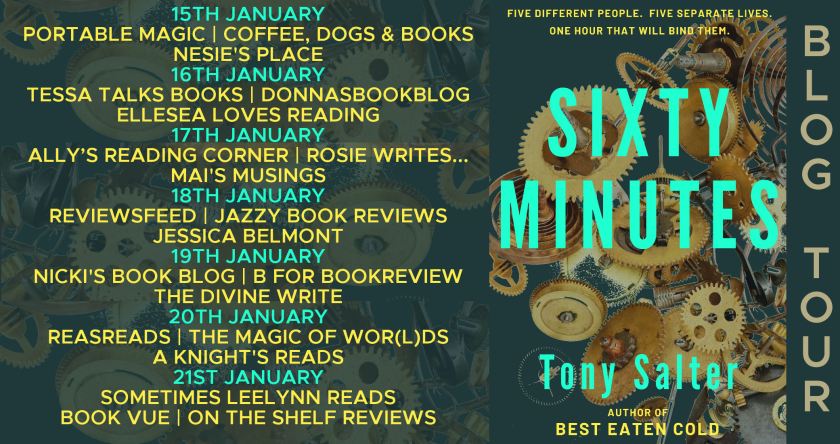 Tony’s latest thriller, Sixty Minutes, was released on 29th August 2019. Tony is the author of bestselling psychological thriller, Best Eaten Cold. He writes pacy contemporary thrillers which explore different themes, but all share Tony’s thought-provoking plots and richly-painted characters. Sixty Minutes is his fourth novel. His second novel, The Old Orchard – a gripping family thriller – was published on the 7th of November 2017 and the sequel to Best Eaten Cold, – Cold Intent – was published in November 2018. Highlights of his early career include (in no particular order) three years as an oilfield engineer in the Egyptian desert, twelve years managing record companies for EMI Music in Greece, India and across Eastern Europe, running a caravan site in the South of France and being chauffeur to the French Consul in Sydney. Having survived the Dotcom boom, he went on to be a founder of the world’s largest website for expatriates, a major music publisher and a successful hotel technology business. In amongst this, Tony found the time to backpack around the world twice (once in his twenties and once in his fifties), learn six languages (including Norwegian and Greek) and to find a beautiful Norwegian wife. He now lives in Oxfordshire and writes full-time. He has recently turned sixty and is married with three children and five grandchildren. You can find out more about Tony at www.tonysalter.com

*Terms and Conditions –Worldwide entries welcome.  Please enter using the Rafflecopter box below.  The winner will be selected at random via Rafflecopter from all valid entries and will be notified by Twitter and/or email. If no response is received within 7 days then Rachel’s Random Resources reserves the right to select an alternative winner. Open to all entrants aged 18 or over.  Any personal data given as part of the competition entry is used for this purpose only and will not be shared with third parties, with the exception of the winners’ information. This will passed to the giveaway organiser and used only for fulfilment of the prize, after which time Rachel’s Random Resources will delete the data.  I am not responsible for dispatch or delivery of the prize.