Title: Murder On The Rocks (Jordan Jenner 1) by JS Strange

‘I felt that I had been sucked into a well thought out Agatha Christie novel.’ – Danielle at The Reading Closet.

When PI Jordan Jenner returns to work following the death of his mother, his first case involves a murdered writer…

James Fairview has been killed. As a member of a prestigious writing group hosted by bestselling author Joseph Gordon in the heart of Cardiff, Jordan not only has to cope with solving the mystery, but also deal with press attention.

As Jordan investigates, he discovers his mother’s death may not have been so simple. And when another writer is murdered, Jordan realises the killer could strike again…

A murdered writer, a mysterious death, and a group with jealousy at its heart, this is Jenner’s toughest case yet.

A cosy murder mystery with a gay male detective, Murder on the Rocks is the first in the Jordan Jenner Mysteries series. If you’re a fan of classic whodunits you will love this!

A perfect read for those looking for Welsh crime fiction.

‘Strange was clearly channelling his inner Agatha Christie when writing this. Jordan holds himself like a modern-day Hercule Poirot.’ – Kelly at From Belgium With Book Love.

‘You simply cannot put this down.’ – Duncan Thompson, author of Within the Dark Places.

I’m always on the lookout for cosy mysteries that are unique, so when I saw this one was not only set in Wales (it’s where my grandad was from) and has a lead gay detective, well I knew I had to give it a go. I actually have the second book in this series (review coming in February) so I thought I’d go back to the beginning and start with the first book.

Jordan Jenner is still reeling from his estranged mother’s sudden death and thinks going back to his private investigation work will be a good distraction. He’s asked by the local police to investigate the death of a wannabe novelist at a writing group.

As he investigates, he finds his mother was a member of the group. Could there be more to her death than meets the eye?

Murder on the rocks is a gentle mystery with bags of intrigue and some unique characters.

I liked Jordan. He’s determined, smart,  a little grumpy at times with a tendency to push people away but it’s understandable when you hear about the strained relationship between him, his mother and brother.

I wish there had been a little more Welsh slang/words in the novel just to give it the writing a little bit more flair. Also I do feel that it could have been a little shorter as my attention started to waver a little.

Murder on the rocks is a solid cosy mystery, I’d recommend to anyone who loves this genre!

J.S. Strange is an author from Wales, United Kingdom. He writes crime, mystery and 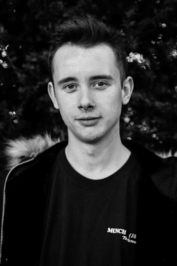 horror. His first novels, published in 2016 and 2017, were set in an apocalyptic London. His up-coming novel, titled Murder on the Rocks, is the first in a cozy crime mystery series, featuring a leading gay male detective.

Murder on the Rocks was written by Strange for many reasons. One of those reasons was a lack of representation within the crime genre, particularly with detectives and sleuths. Strange created Jordan Jenner, a private investigator, who lives and works in Cardiff. Murder on the Rocks was written with the intention of shining light on Cardiff, and bringing Cardiff, and furthermore, Wales, into the crime genre.

When Strange doesn’t write, he works in television. He also presents a radio show all about the paranormal. He has an enthusiasm for Britney Spears and cats.

2 thoughts on “#BookReview Murder On The Rocks (Jordan Jenner 1) by J.S. Strange #CozyMystery”