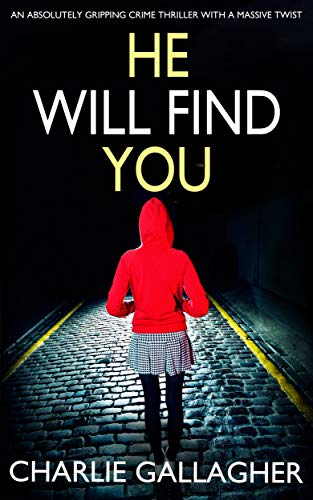 Title: He Will Find You (Maddie Ives 3) by Charlie Gallagher

MEET DETECTIVE MADDIE IVES IN THIS NEW SERIES THAT WILL HAVE YOU GRIPPED FROM THE EXPLOSIVE START TO ONE OF THE MOST SHOCKING TWISTS THIS YEAR.

Early Sunday morning, a rainy city centre. A ten-year-old-boy steps out in front of traffic. He is dazed, confused and barefoot. He is covered in blood. It’s not his.

Detective Maddie Ives is called out and finds the boy backed up against a shop front. He can’t or won’t speak. His face is a mask of shock and his whole body is tense. He’s ready to run again. He can’t tell her why.

WHO SCARED THIS BOY OUT OF HIS WITS?

Then a man is found brutally murdered, dragged to death. And Maddie and Detective Harry Blaker are determined to find out who is pulling the strings.

IF THEY DON’T STOP HIM, HE WILL FIND MORE VICTIMS. AND THE EVIL WILL COME CLOSE TO HOME.

HE WILL FIND YOU: The new heart-pounding thriller from Charlie Gallagher. Maddie Ives faces her most dangerous adversary.

1: HE IS WATCHING YOU

4: HE KNOWS YOUR SECRETS

I’m doing a bit of a catch up, I have a review of the fourth in this series tomorrow, so I thought I best read this one first as it’s been sitting on my NetGalley shelf since July!

So this is the third in the Maddie Ives series but works perfectly well as a standalone without feeling you’ve missed too much.

A boy is found bloodied and wandering the streets. He refuses to speak. Maddie Ives is the officer on duty and happens to land the case. A man is found dragged to death but it’s only the beginning. Can Maddie, along with her boss Harry Blaker piece things together before anyone else gets hurt?

My goodness what a book! He Will Find You is a complex but compelling story that blends several storylines together seamlessly.

I love Maddie as a character. She’s strong and a little stubborn, a former undercover officer who is still struggling to work as part of a team and not go off on her own but she still a very likeable character who you’d want in your corner if you ever needed it.

I also enjoyed seeing a more personal side to Harry Blaker who may have a gruff exterior but underneath he’s still struggling with the death of his wife and to connect with his daughters.

My only issue was I felt the first half of the book was a little slow paced but boy that ending, had me biting my nails!

He Will Find You is a tense and gripping police procedural that did not disappoint!

Charlie Gallagher has been a serving UK police officer for ten years. During that time he has had many roles, starting as a front-line response officer, then a member of a specialist tactical team and is currently a detective investigating serious offences.