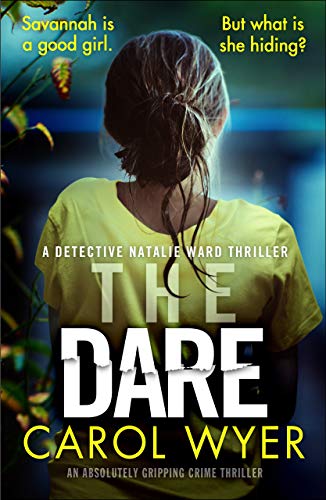 Title: The Dare by Carol Wyer

Jane’s daughter is a good girl. But what is she hiding?

When thirteen-year-old Savannah Hopkins doesn’t come straight home from school as she always does, her mother Jane immediately raises the alarm. With her blonde ponytail and red school jumper, someone must have spotted Savannah.

Detective Natalie Ward is determined to help the distraught mother – her own daughter is the same age as Savannah. But before Natalie and her team can get started, their worst fears are confirmed when the teenager’s broken body is found in nearby shrubland.

Evidence points towards a local recluse, but just as Natalie closes the net around him, one of Savannah’s friends, Harriet, is reported missing. Harriet might look grown up and sophisticated but she is only fourteen…

As Natalie delves into the lives of both girls, she soon discovers a sinister video on both their phones, daring the girls to disappear from their families for 48 hours. She’s sure this is the key to the case, but before she can act, Harriet’s body is found discarded on a roadside.

Natalie’s superiors don’t have to put any extra pressure on Natalie. Devastated, she and her team work without sleep, watching that video over and over. But just as she thinks they’re getting close, the person Natalie loves more than anything goes missing.

Natalie is no stranger to loss. She is terrified and the clock is ticking. Can she push through her fear to catch this depraved killer, before her loved one becomes the next victim?

This gripping rollercoaster of a read will have you up in the small hours turning the pages. Fans of Angela Marsons, Rachel Caine and Robert Dugoni will love The Dare.

So this is the third in the DI Natalie Ward series and actually the first one I’ve read. I think it works perfectly well as a stand alone but if you want to get the full back story you should probably start with the first in the series, The Birthday.

When Savannah Hopkins goes missing, everyone is hoping that she will just turn up. Natalie is assigned to the case but their worst fears are confirmed when she’s found dead near her house.

A second girl goes missing and a disturbing video turns up on a website daring people to disappear. With her boss breathing down her neck, can Natalie and her team get to the bottom of it before another girl gets hurt?

When I finished this book, I said to myself, why haven’t I started reading this series sooner??? It really gripped me from the very beginning with loads of twists and turns.

This is such a realistic and scary scenario. It’s every parent’s nightmare if your child doesn’t come home from school, I know it’s one of my top fears as the mother of a teenage boy (even if he is a grumpy bugger most the time).

I also enjoyed the little snippets throughout the book from the killer’s perspective, giving the story that extra bit of creepiness.

I liked Natalie. She’s a meticulous detective but also battling a complicated home life, with a husband she’s not sure she can trust and teenaged children.

I did have an idea of who the killer was but boy did Carol Wyer keep me on my toes, second guessing myself, until the end.

The Dare is a gripping and realistic police procedural that will keep you guessing until the very end.

Carol moved to the ‘dark side’ in 2017 with the first Di Robyn Carter thriller. LITTLE GIRL LOST became the #2 best-selling book on Amazon, #9 best-selling audiobook on Audible and a Top 150 USA Today best-seller.

To date the DI Robyn Carter and DI Natalie Ward series have sold over half a million copies, earning her acclaim as a crime writer.

2019 sees the release of two romantic comedies and three DI Natalie Ward novels, including the much anticipated THE DARE and THE SLEEPOVER.

Carol has been interviewed on numerous radio shows discussing ”Irritable Male Syndrome’ and ‘Ageing Disgracefully’ and on BBC Breakfast television. She has had articles published in national magazines ‘Woman’s Weekly’ featured in ‘Take A Break’, ‘Choice’, ‘Yours’ and ‘Woman’s Own’ magazines and the Huffington Post.