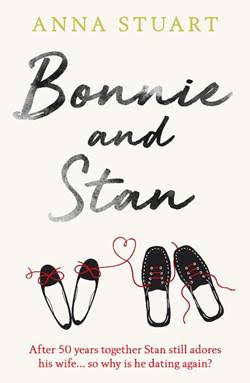 Bonnie and Stan are soulmates. They met during the Swinging Sixties, to the soundtrack of The Beatles and the Merseybeat scene. They’ve grown up and grown old together, had children and grandchildren. They are finally settling into retirement and building their dream home when disaster strikes.

Stan cannot bear the thought of leaving Bonnie. All his life he’s devoted himself to looking after her and now, when it really counts, he will have to leave her alone. Or will he…? Alongside his teenage granddaughter Greya, he forms a plan to find Bonnie a new love of her life. And she must never find out…

Bonnie & Stan is a poignant, surprising love story set during the Swinging Sixties and the present day which will make your heart sing.

I want to thank Tracy at Compulsive Reader’s for inviting me on this blog tour and Trapeze for the copy of Bonnie and Stan via NetGalley.

I have to be honest I’m not usually one for contemporary fiction but this book had two things that really appealed to me, first older main characters (Bonnie and Stan are in their seventies) and it’s partly set in Liverpool back in the Swinging Sixties, a decade which I love to read about.

Poor Stan, just on the verge of retirement and building his dream home, he finds out he has incurable cancer. He can’t stand to think of Bonnie on her own so he sets about trying to find her a new husband.

Bonnie and Stan is one of those ‘I’m not crying honest, there’s just something in my eye’ reads. I always find it a little harder to read a book with a protagonist who’s dying, especially from cancer which took my mother ten years ago, but this topic is handled with sensitivity by the author.

The characters are so well written, I felt like I almost knew them. Stan is the more pragmatic, accepting what is happening to him whereas Bonnie is looking for a miracle cure. I think we all have a little bit of Bonnie in us, especially when someone is ill.

My favourite aspects of the novel is when we travelled back to the sixties. The Beatles had just found fame and the buzz of the Liverpool music scene was at it’s height. As I’m from Liverpool myself I have a bit of a fascination with that era, my parents were both teenagers at the time and it just seemed like an exciting place to be. I also liked the attention to detail, like the description of the old Cavern club, which was just how my parents described it, damp and a little bit dingy but still one of the places in Liverpool to be seen.

I have to be honest this is quite a slow and steady novel and frankly I liked the sixties parts better than I did the ones set in the present but of course that’s just my opinion.

Bonnie and Stan is a must read story if you like poignant, character driven stories all about love, life and family.

Anna Stuart has wanted to be a writer ever since she sat up in her cot with a book. For years she wrote short stories and serials for the women’s magazines before being published by Pan Macmillan as a historical novelist under the pseudonym Joanna Courtney. Her Queens of the Conquest series, set in the pre-1066 years, has been published to acclaim in all formats including audiobook and been translated for European markets but she is delighted to return to the contemporary world for Bonnie & Stan.