Do you love a gripping mystery with a huge twist? Then try this book by a #1 best-selling author now. You won’t be able to put it down. By an author everyone’s talking about.

A MYSTERY WHICH WILL CAPTIVATE YOU TILL THE STUNNING ENDING

A crime wave has hit town. The target is a highly sought-after brand of streetwear called Hybird X, clothing that costs a fortune and resells for unbelievable prices. Houses are burgled, young men mugged on the streets . . . and finally a young man dies, all for the sake of his shoes.

And then another boy’s body is found in a pile of rubbish. Meanwhile illegal steroids are flooding the streets.

A shadowy figure called Darke and his teams of young criminals seem to be behind it all.

Detectives Jackman and Evans must take on a fiendish criminal, while still haunted by Alistair Ashcroft, the serial killer they never caught.

WHO IS DARKE AND WHAT DOES HE REALLY WANT?

Full of twists and turns, this is a crime thriller that will keep you turning the pages until the shocking ending.

THE DETECTIVES
DI Jackman leads the investigation. He is extremely smart and has a knack for bringing out the best in his diverse team. DS Marie Evans is haunted by the loss of her husband in a motorbike accident. She is fiercely loyal to her friends and colleagues.

DI Jackman and DS Evans are still haunted from their previous case when they are tasked to investigate a spat of organised robberies involving a designer brand called Hybird X. The case takes a darker turn when a boy is killed after his trainers are stolen.

Another boy is found in a pile of rubbish, with no identifying traits and seemingly nobody looking for him.

If that didn’t keep them busy enough illegal steroids are flooding the streets. Will Jackman, Evans and their team figure out what’s going on?

So this is the fifth in Jackman and Evans series and to be honest you could read it as a stand-alone but I would recommend reading the previous book, The Guilty Ones, (you can read my review here) just because some elements of the story line do carry over.

Poor Jackman and Evans, they are really struggling! Jackman is suffering from low spirits after the escape of Alastair Ashcroft and compounded by the break up of his relationship. Evans is still struggling with her leg injury and to make matters worse an old nemesis who she thought she’d seen the last of pops up again, intent on making her life a misery.

There’s several different perspectives in the book including a runaway by the name of Mossy who’s story I found the most compelling. He’s smart but also neglected and thinks the only way he can help his friend Alice out of an abusive situation is to join the gang.

I have to be honest this started off a little slower in pace than the previous book. Also while I thought the designer clothes theft angle is original it just takes a little bit of time to wrap my head around (which Joy Ellis does make clear at the beginning of the book!) especially when I didn’t realise the clothes were called Hybird X not Hybrid X until about ten chapters in even though it was mentioned several times.

Overall The Stolen Boys is an original and engaging story with character you can’t help caring about, that will take you on a surprisingly emotional journey.

“I was born in Kent but spent most of my working life in London and Surrey. I was an apprentice florist to Constance Spry Ltd, a prestigious Mayfair shop that throughout the sixties and 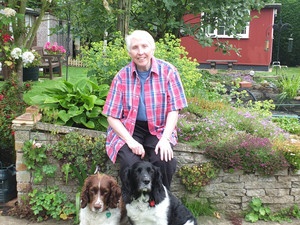 seventies teemed with both royalty and ‘real’ celebrities. What an eye-opener for a working-class kid from the Garden of England! I swore then, probably whilst I was scrubbing the floor or making the tea, that I would have a shop of my own one day. It took until the early eighties, but I did it. Sadly the recession wiped us out, and I embarked on a series of weird and wonderful jobs; the last one being a bookshop manager. Surrounded by books all day, getting to order whatever you liked, and being paid for it! Oh bliss!

And now I live in a village in the Lincolnshire Fens with my partner, Jacqueline, and our two second generation Springer spaniels. I had been writing mysteries for years but never had the time to take it seriously. Now I can, and as my partner is a highly decorated retired police officer; my choice of genre was suddenly clear. I have set my crime thrillers here in the misty fens because I sincerely love the remoteness and airy beauty of the marshlands. This area is steeped in superstitions and lends itself so well to murder!”