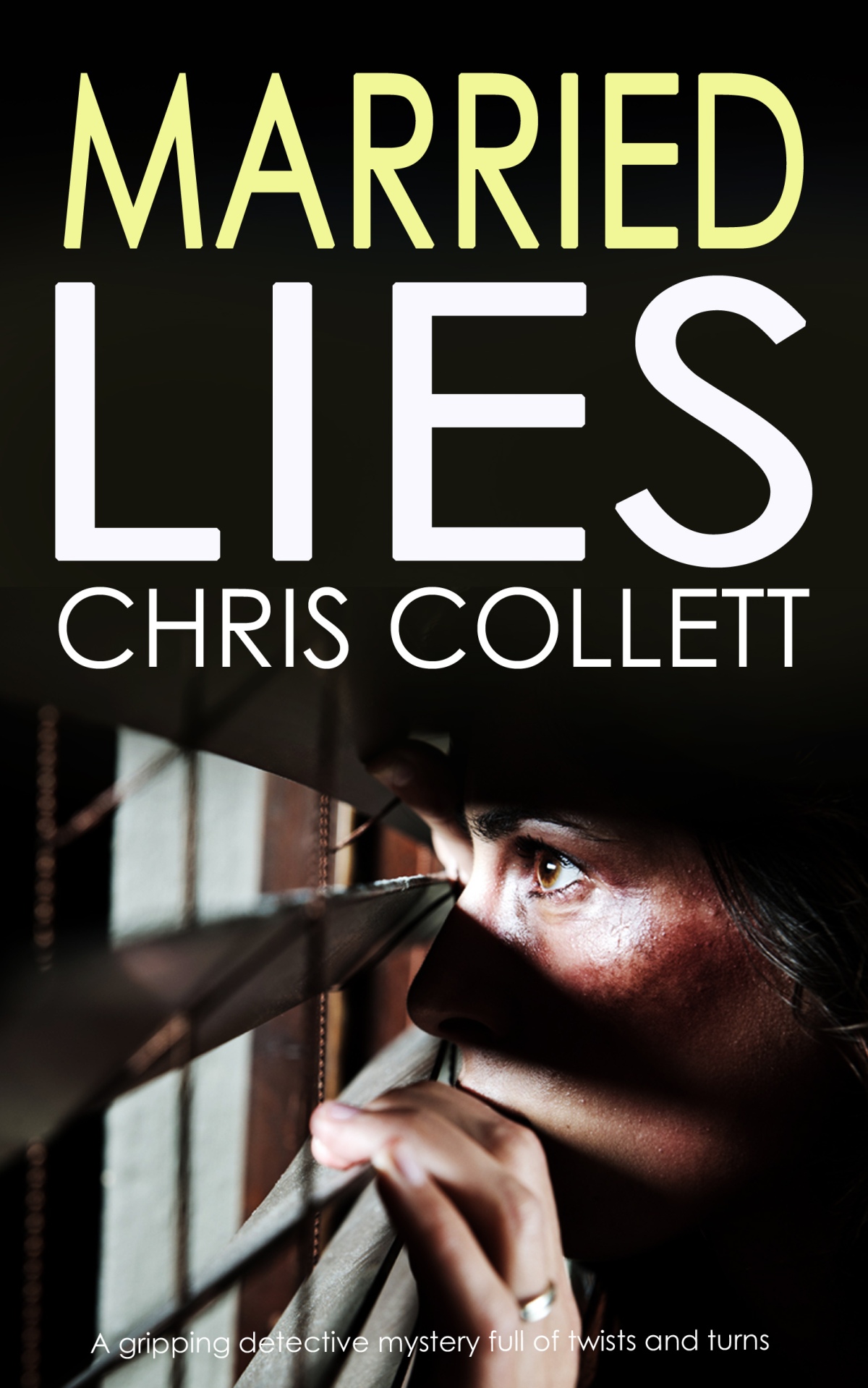 Today I’m excited to bring you a Q&A with the lovely Chris Collett as part of the blog tour for her latest novel Married Lies, first a little bit about the book:

Lucy Jarrett is terrified. Someone is watching her every move, following her home from work and making threatening phone calls. But her husband doesn’t believe her and no one else is listening.

Lucy’s married life is proving anything but blissful. Her musician husband is perpetually away on tour and doesn’t want to start a family.

Lucy finally calls on DI Tom Mariner for help, and he takes her fears seriously because of the recent murder of another young woman by her ex-partner.

Mariner himself is already on the hunt for a sadistic killer. Nina Silvero, wife of an ex-police officer, was duped into sipping sulphuric acid disguised as celebratory wine. Grappling with her apparently motiveless killing, Mariner delegates Lucy’s case to Millie Khatoon.  Is someone out for revenge against the police?

Can DI Tom Mariner track down the stalker and catch the killer before anyone else dies?

Perfect for fans of Peter James, Ian Rankin and Peter Robinson. This is the fifth book in the DI MARINER SERIES, more books coming soon!

Birmingham is a city of stark contrasts with a rich cultural and historical heritage. Playing a key role in the industrial revolution, it helped shape the nation’s manufacturing industry

But with its many green spaces, Birmingham also borders on the beautiful countryside of Worcestershire and Warwickshire, is just a few miles from Stratford on Avon and a short drive from the wild country of mid-Wales.

Birmingham’s population is large and ethnically diverse, and while urban regeneration has forged a modern and culturally vibrant city, the decaying remnants of the industrial past and 1960s concrete jungle give it a unique and gritty character; the dark underbelly policed by DI Tom Mariner and his team.

Detective Inspector Tom Mariner is, on the surface, an average dedicated policeman, but his experiences as a younger man have given him an insight into life on the dark side, and a clear sense of right and wrong. Mariner has little interest in material things. He lives in a modest canal-side cottage, enjoys the occasional (real) beer and game of dominoes and drives an old car. He is most at home in the outdoors, with an OS map and a compass, and in times of crisis, will take off and walk for miles in any weather.

THIS IS A REVISED EDITION OF A BOOK FIRST PUBLISHED AS “STALKED BY SHADOWS.”

For those readers who have never read your Tom Mariner series, can you give them a brief overview?

The series is a police procedural set in the city of Birmingham, UK. DI Tom Mariner works out of a suburban police station on the range of complex cases that might be expected in a huge multi-ethnic conurbation. As one reader/reviewer recently put it: If I was the victim of a crime, Mariner is the detective I’d want to investigate!

Can you tell us a bit about Married Lies?

Often the inspiration for the Mariner books comes from a news story or magazine article I’ve read. Married Lies followed on from a piece I saw about women who had been stalked, and eventually murdered, by someone close to them. I’m intrigued by the mentality of the stalker and the lengths that (usually) he will go to. Married Lies is primarily about a young woman who is being stalked by person(s) unknown.

Where did the inspiration for Tom Mariner come from?

The simple answer to that is I don’t know! When I embarked on the first book in the series – Deadly Lies – he really was an unknown entity. I knew how the story would unfold and what I wanted my detective to do to solve the mystery, but Mariner himself ‘evolved’ during the course of that book, and I hope he has continued to do so. While not based on any one person, I suspect that I’ve taken Mariner’s character traits and foibles from all sorts of people I’ve known – including me! His name also went through several previous incarnations, none of which felt quite right. But given that I grew up by the sea, and my great-great grandfather was a trawlerman, I like the idea that my protagonist is also a Mariner.

If you were to recommend one book everyone should read, what would it be?

The most affecting book I’ve read is Chris Mullin’s ‘Error of Judgement’ about the six men wrongly convicted of the 1974 Birmingham pub bombings (an event touched on in the third Mariner book ‘Killer Lies’). The revelation of such blatant (and violent) prejudice inside the institutions designed to protect us, along with that feeling of ‘it could happen to anyone’, is terrifying. It kept me awake for nights.

My fiction recommendation would be ‘Wolf Hall’ by Hilary Mantel. In Thomas Cromwell Mantel has taken an unprepossessing man and somehow created an enormously attractive and charismatic character. I found the book totally gripping. I was later lucky enough to see the RSC dramatisation at Stratford too.

What is a typical writing day for you?

I think because (like many writers) I started out when I was working full-time and had a young family, I’ve never had a regular writing routine. Instead it had to be fitted in with other things. What this does mean is that I’m pretty flexible about when and where I write. I do have a designated ‘office’ space, but often end up elsewhere. What has changed since I retired from the day job is that I have the freedom to spend much more time each day writing, which feels like such a luxury!

Tell us something interesting about yourself (that’s not in your author bio!). In my teens I was football mad and played in a women’s football team.

While continuing to revise the original Mariner series for Joffe, I’m in the very early stages of the next (#9) Mariner outing. I’m also working another crime novel – working title Pure Evil – which I hope will be the start of another series with two new protagonists.
CHRIS COLLETT – AUTHOR BIO

I was born and grew up in a Norfolk seaside town, almost as far east as it’s possible to go in

England without falling into the North Sea. There I worked variously in a boarding house (now defunct) a local bakery (closed down) and a crisp factory (razed to the ground). I graduated in Liverpool, then for twenty-five years taught children and young people with learning disabilities, including autism, before going into higher education as a senior lecturer.

Mindful of its reputation, I moved somewhat reluctantly to Birmingham, where I met my husband, in 1981. But just a few years later DI Tom Mariner was created to police its mean streets, and these days I relish the vibrancy and rich social history of the city. After eight outings for Mariner, I still feel as if I’ve barely scratched the surface.

Recently retired from lecturing and I’m currently luxuriating in the time I now have to continue the Mariner series, alongside published short stories and academic works. In my spare time, among other things, I’m a manuscript assessor for the Crime Writers Association.