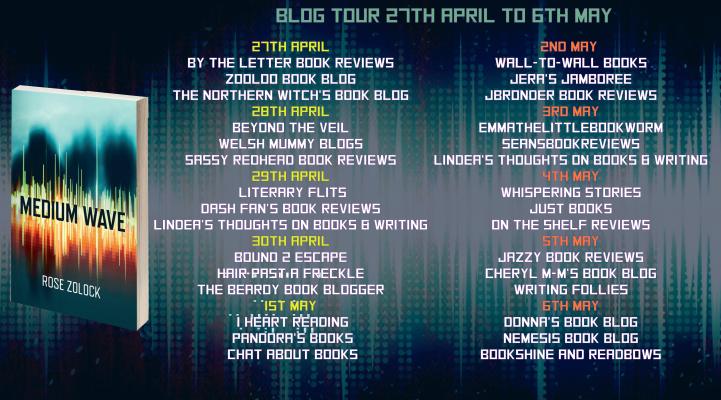 Becky Moran has built a career claiming to talk to the dead. A successful clairvoyant medium, a Cambridge graduate with her own radio show ‘Medium Wave’ and a team dedicated to crafting the celebrity myth – because Becky Moran is a fake. Until, one night, something supernatural, inexplicable, breaks through live on air as she is broadcasting. Becky Moran discovers the paranormal is real, the dead can indeed speak and she is being pursued relentlessly towards a battle for her very survival.

‘This thing has no defined shape. Whatever energy exists within it, it cannot settle on a shape. The strands of darkness curl out and then wrap back inwards. The bulk of the shadow becomes concave, then bulbous, the height building in on itself but lacking any skeletal structure to wrap itself around. There are no eyes, no clearly defined head shape. It is creating itself from darkness, like a swirl of ebony ink dropped into a vat of putrid water, spreading silently….’ 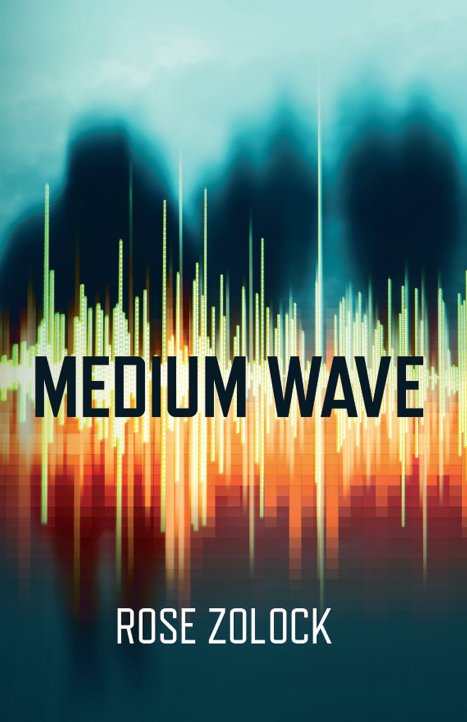 Becky Moran has been a medium for a number of years, she has her own radio show, now a TV show is in the offing too. Only problem; Becky is a fake. During a live radio show, Becky touches an ancient crystal and suddenly her ability to see ghosts becomes real!

So I am a huge fan of all things ghostly so this book was right up my alley. It’s a fairly short yet creepy book with plenty of spooky goings on, that I suggest you read during the day in bright sunshine with a good duvet to hide under just in case.

The cast of characters is an interesting one as well. You’ve got Hugh Jolly, Becky’s greedy and slightly selfish manager, her assistant Stacey who loves to wear mothball scented vintage clothing and her producer Olly the complete and utter sceptic. I have to be honest it took me a little time to warm to Becky, because of her being essentially a con artist at the outset of the book, but as the story goes on you see her struggling with her new gift and you can’t help feeling for her.

My favourite part of the book was when Becky came into contact with a haunted mirror that chooses its owner and never lets them go! Safe to say I had the shivers when I went near any mirror in my house afterwards!

I have to be honest though, there was a tiny bit of repetition and the story didn’t quite flow as well as it should have and I found the ending a little over contrived but of course that is just my opinion.

This is a great start to a series and I’m interested to see what the writer does with Becky and her friends next.

About Rose Zolock
Her Irish grandmother first told Rose about the Banshee when she was just a small child. How

the wailing sound of the spirit of the dead and dying could be heard when someone was about to pass.

It was family folklore that the women in the family had ‘the touch’, the ability to see spirits and other dimensions. Rose listened and grew up fascinated by those who claimed to have supernatural or psychic abilities.

Rose does not claim to have those powers. Take her to Venice in February when the mist swirls over the canals, walk by her side along the darkened streets of Greenwich Village in New York City in high summer, listening to a ghost walk tour guide tell the stories of death, murder and the unexplained – Rose would say those stories and our belief in them gives her a power to see into the shadows within our imagination.

As a journalist, Rose takes every opportunity to explore and investigate strange stories, myth and folklore. Living in rural Yorkshire, with a rich library of ghost stories and literary tradition, Rose also has a sceptical and forensic insight into those who peddle the stories which feed our imagination but of which we have yet found no proof. She has listened to the debunkers who argue against those believers who are convinced that sand the dark side exist.

Rose’s mind is open. Is yours?