Konrad Neale is a television presenter. His waning career has been given a new lease of life since he took on a series of hard-hitting documentaries that investigate miscarriages of justice.

Matthew Hawley has been convicted of the brutal murder of his wealthy attractive wife Helena. However, he has no memory of the events and insists he is not responsible for willingly killing her.

When Konrad interviews Matthew in prison, he explores the details of the murder and the possible motives behind it. But all is not as it seems.

Did Matthew murder his wife?

Soon the search is on to identify who else might be involved in the murder of Helena and Konrad is about to learn that sometimes the camera lies.

Konrad Neal presenter of true crime series, The Truth Behind The Lies, begins investigating the murder of Helena Chawston-Hawley by her husband Matthew. He has no memory of killing her and claims they were blissfully married and had no motive to kill her.

Konrad and his team begin digging around, uncovering evidence of Helena’s mysterious sister but soon he begins receiving messages threatening him and his family, somebody who doesn’t want the truth to come out.

This is the second book I’ve read by this author this year, you can read my review of the other novel, Divine Poison, here.

This is one of most unusual crime novels I’ve read this year. It’s told as if your behind the scenes on a documentary TV show, watching through the research/interview/editing process but it’s not as dry or boring as you would imagine it. I could actually see this being turned into an excellent TV series.

There’s as a little of that unreliable narrator from Matthew Hawley.  Do you really believe his story? How could he have no memory of murdering his wife? As the story goes on it’s revealed that Helena is not the smart successful woman that everyone believes she is and has a much darker side that makes you question Matthew’s innocence.

Now I have to be honest I didn’t find Konrad all that likeable, a bit full of himself to be honest, but he’s one of those characters that is so interesting that he holds your attention. I did also feel a bit sorry for him a little being trapped in a loveless marriage and in love with someone else.

It’s quite difficult as with most mystery/thriller to give a complete review without revealing any spoilers but I did find certain aspects of the plot a little unbelievable. I also felt that there was a little lack of character description, the only person I could picture clearly was Konrad’s friend Annette.

Overall there a few plot issues but it’s still a unique and interesting psychological thriller.

Alison Morgan started writing a couple of years ago to address that niggling question: could she write a book? The answer was a simple yes. She’s had to retire from the NHS a little earlier than 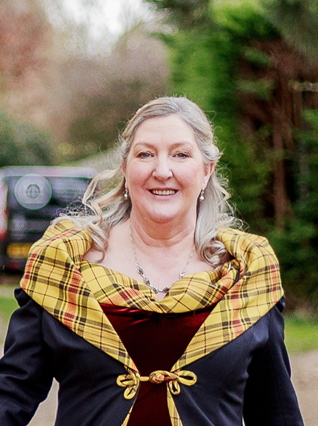 planned, but has discovered a new passion. Writing. Her debut novel, A Justifiable Madness, was published by Bloodhound Books in September 2017 attracting great reviews for its refreshing premise and dark humour. With two further novels being published at the beginning of 2018, it seems Alison has a promising future as an author. Divine Poison is the second novel to feature Monica Morris, a mental health nurse, as the main protagonist in this crime mystery, but there are no plans for a series. Alison’s third suspense novel, The Camera Lies, steps away from the field of nursing and into the world of real crime documentary films.

Alison lives with her husband Andy and their dog Sadie, in a small village north of Bedford. She’s not the type to let life get in the way of adventure and so, always up for the next challenge, she decided to have a proper midlife crisis and learn to ride a motorbike. In August she passed, first time. Her husband was impressed until she swung her leg over his prized Triumph and roared off with a big grin on her face. ‘Research for the next book,’ she cried. The fourth book is under construction and does indeed feature motorbikes.

One thought on “#BookReview #BlogBlitz The Camera Lies by A.B. Morgan @AliMorgan2304 @Bloodhoundbook”