HOW DO YOU CONFRONT YOUR HUSBAND WHEN YOU DON’T WANT TO KNOW THE TRUTH? Gripping psychological suspense from a brilliant new voice in crime fiction.

Twenty years ago, Dennis Danson was arrested and imprisoned for the brutal murder of a young girl in Florida’s Red River County. Now he’s the subject of a true-crime documentary that’s whipping up a frenzy online to uncover the truth and free a man who has been wrongly convicted.

A thousand miles away in England, Samantha is obsessed with Dennis’s case. She exchanges letters with him, and is quickly won over by his apparent charm and kindness to her. Soon she has left her old life behind to marry him and campaign for his release.

But when the campaign is successful and Dennis is freed, Sam begins to discover new details that suggest he may not be quite so innocent after all …

But how do you confront your husband when you don’t want to know the truth?

‘You can hear the ominous music from the first line onward – this is a fantastic thriller.’ Lee Child

‘An original, assured and compelling tale of obsession. Amy Lloyd is a startling new talent, destined to become a big name.’ Peter James

‘If you’re an addict of true crime documentaries, you will binge all night on The Innocent Wife. In this breathless, pounding ride, Amy Lloyd keeps us guessing about a convicted killer thrust into the world as innocent online hero and the woman who begins to reluctantly dig into his murky past.’ Julia Heaberlin, author of Black Eyed Susans

‘I read The Innocent Wife in one sitting – a deliciously wry and dark exploration of fascinating subject matter that will keep you guessing until the last page. Amy Lloyd is a fresh and original new voice in thriller writing who deserves to go straight to the top.’ – Sarah Pinborough author of Behind Her Eyes

‘The Innocent Wife is a stunner that leads the reader down a twisty path to a surprising, yet satisfying conclusion. You won’t be able to stop turning the pages!’ –Karen Dionne, author of The Marsh King’s Daughter

‘I devoured The Innocent Wife in one sitting! A unique setting, deeply flawed characters, a crackling mystery, and an unexpected ending make this a must-read!’ Hollie Overton, author of Baby Doll. 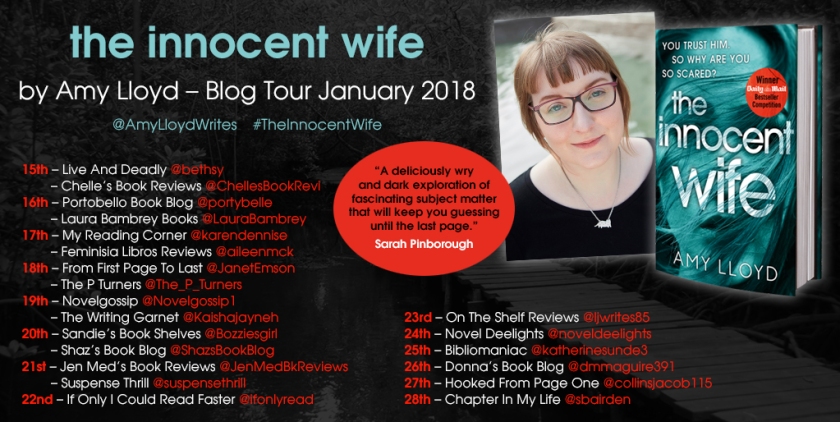 I want to thank Anne Cater for inviting me on this blog tour.

Samantha is introduced to Dennis Danson through a documentary about his conviction for the murder of eleven year old Holly Michaels. She quickly becomes obsessed with him and his innocence, beginning a long distance romance, writing each other letters.

Leaving her old life behind she travels to see him, getting involved with the campaign to free Dennis and the documentary series A Boy From Red River. But when his is released, Sam is not sure that he’s the same man she fell in love with and has secrets. What is he hiding?

Goodness me I’ve had this on my tbr list for so long and I don’t know why I haven’t read it before now! It really gripped me from the first chapter and the need to find out what happened next kept me going back for more.

I really felt for Samantha, she seemed such a lonely and damaged soul. There also a bit of mystery there too, something happened with her ex-boyfriend that she’s utterly ashamed of, which makes her slightly neurotic and a little unstable at times.

The first part of the book is made up of letters between Sam and Dennis, which I kind of thought were sweet, even though he’s on Death Row. Also excepts, from a book called River Runs Red, are weaved cleverly in, which gives you bits of Dennis’ history and the case without seeming like an info dump. Once released they return to Red River, Dennis’ home town and the book takes on a more sinister tone and the tension is really amped up until the end.

My only complaint was I didn’t find the ending that satisfying, I can’t tell you why because that would be a spoiler, but it just didn’t sit quite right with me.

Overall a compelling read and I’d say a must read for any psychological thriller fans out there.

Amy Lloyd studied English and Creative Writing at Cardiff Metropolitan University. Her writing combines her fascination with true crime and her passion for fiction. In 2016 she won the Daily MailBestseller Competition for her novel The Innocent Wife. Amy lives in Cardiff with her partner, who is also a published novelist.